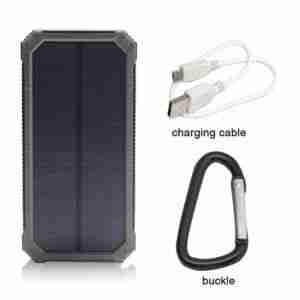 There are two USB charger ports so you’ll be able to charge smart phones, tablet computers, camera gear, or anything else that can be charged through a USB port.

The iBeek Portable Power Bank comes with a carabiner so the solar panel can be hung from a backpack while you’re out hiking to charge up the battery so that you will have power for your devices even after the sun goes down.

There is also a built-in LED flashlight/emergency light. Just push the button twice for flashlight mode, and press it one more time for emergency mode which will cause the LED light to flash on and off.

When researching the iBeek Portable 12,000 MA Hour Dual USB Solar Battery Charger Power Bank we found over 700 customer reviews online and the reviews are mostly positive but somewhat mixed. This product received an average customer rating of 3.7 out of 5 stars.

Of course there were also hundreds of positive reviews online from people who have a lot of great things to say about this inexpensive solar panel and battery kit. It’s important for us to point out however that even a lot of the 5 star reviews from customers, who are saying what a great product this is, are saying that they haven’t used the solar panel and their review is based on charging their devices just using the built-in battery.

People who are using the iBeek Portable Power Bank has an extra battery are saying that they are able to charge things like iPhones and tablet computers very quickly, in fact even more quickly than simply plugging it into the wall at home.

The iBeek Portable 12,000 MA Hour Dual USB Solar Battery Charger Power Bank is very inexpensive with a price tag of just about $22. $22 for a 12,000 mA hour backup battery is a pretty good deal, but this device has a solar panel and is marketed as a product that can be charged in the sun. That is where this device seems to fall short for a lot of customers.

If you want an inexpensive backup battery to extend the life of your gadgets when you’re away from home, you may want to consider buying the iBeek Portable Power Bank, but if you’re expecting the solar panel to do all of the charging, you may be disappointed.