The Tracer 2210RN Solar Charge Controller Regulator uses an advanced tracking algorithm so your solar panels will operate at the ideal voltage and produce the maximum amount of available power. 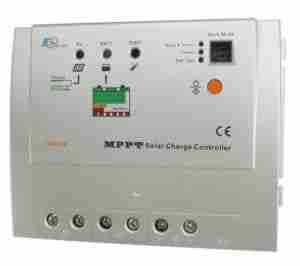 This charge controller can step down a higher voltage solar array to recharge a lower voltage battery bank.

What all of that means is that the Tracer 2210RN Charge Controller will help your system run as efficiently as possible whether you are using a grid tied system or an off grid system with a battery bank.

The Tracer 2210RN Solar Charge Controller Regulator is getting mostly positive reviews. When researching this solar charge controller we found over 100 customer reviews online and it received an average rating of 4.2 out of 5 stars.

One customer who initially left a 5 star review came back two years later to update their original review, saying that everything they said about the Tracer 2210RN Charge Controller two years ago still holds true. However, he also points out that this particular solar charge controller only handles 20 amps of input and that is a bit low by today’s solar panel standards. With a lot of modern solar panels putting out 4 to 6 amps, this controller would be able to handle three or four solar panels.

There was also a review from a customer who said that he has a workshop that is completely off the grid and powered by a small solar array. Because the workshop is completely off the grid, he tries to get every last bit of power that he can out of his solar panels and the Tracer 2210RN Charge Controller helped him do that. He said that it not only works as advertised, in his opinion it works better than advertised.

There were also a number of reviews from people who use this charge controller with portable solar system setups like those used on boats or RVs.

With an average customer rating of 4.2 out of 5 stars, the reviews are not perfect and some people did have a few issues with this charge controller. However, most of the reviews are very positive and most customers are very happy with the Tracer 2210RN Solar Charge Controller Regulator.