We recently reviewed four portable solar generators ranging in price from $200 to a little over $600. The less expensive options are just battery banks with various outlets, while the more expensive options also include solar panels for recharging the batteries. 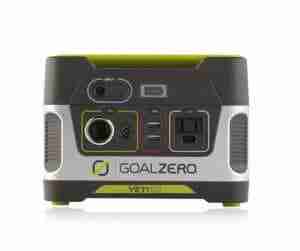 The Yeti 150 is small, lightweight, and extremely portable. It weighs just 12 pounds and it even has a convenient carrying handle on top. This device gives you one AC outlet, one DC outlet, and two USB ports.

While the Yeti 150 can be charged with solar panels, it can also be charged by plugging it into an AC outlet, or even the DC outlet in your vehicle. This is a great option when you’re going to be camping, or just going out for a picnic.

You can charge the batteries as you drive to your destination and then you can keep all of your smart phones, tablet computers, camera batteries and other gear charged when you are nowhere near any other source of electricity.

We looked at a number of different websites when researching the Goal Zero Yeti 150 Solar Generator and we were able to find over 400 customer reviews online. The reviews are pretty strong as well with this device receiving an average rating of 4.2 out of 5 stars.

Many customers are telling stories about how they’re using this portable solar generator. A lot of people are using it to power smart phones and other electronics while they are on camping trips and a lot of people are also using it to power CPAP machines which are devices used by people who have sleep apnea. Some customers said that they felt like they could never be too far away from an electrical outlet because of their CPAP machine, but the Goal Zero Yeti 150 has given them the freedom to go camping with the family again.

There was a 5 star review from a customer who said that she has owned the Yeti 150 for over two years and she loves it. She says she has taken it on numerous camping trips and it has never failed her yet. She said they normally use it to power two smart phones, an MP3 player, a portable speaker system, and even a portable videogame player and they always have enough battery power for all of those items.

The Goal Zero 22004 Yeti 150 Solar Generator is available for $199.99 and most customers love this device, saying that it is worth every penny. 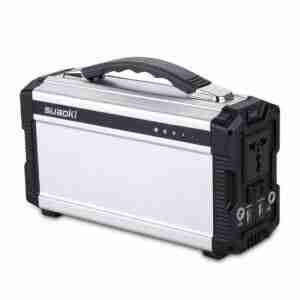 If you need a simple and efficient way to have backup power at your fingertips, you may want to consider the Suaoki Portable Solar Generator. It is a small and very portable device that packs plenty of power. It gives you up to 220 Watts of power and you can charge the internal battery with solar panels or by plugging it into an AC wall outlet.

This device will power anything that can be plugged in with a USB cable, items requiring 12 V DC, or AC appliances under 220Wh.

There were not as many reviews online for the Suaoki Portable Solar Generator as there were for the Yeti 150, but the reviews are pretty strong so far. For this device we were able to find about two dozen reviews online and it received an average rating of 4.4 out of 5 stars.

People are saying that this device works as advertised and most people do seem to be very happy with it. One customer said that he was able to charged two drone batteries, one iPad mini, and two iPhones before the batteries finally died.

The Suaoki Portable Solar Generator seems to be a pretty good option and it is available for the same price as the Goal Zero Yeti 150, at $199.99. 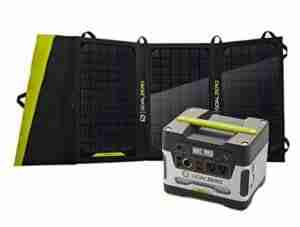 The Goal Zero Yeti 400 Solar Generator Kit is much more expensive than the other two options we’ve looked at so far, with a price tag of $615.69. However, for that price you’re getting the Yeti 400 versus the Yeti 150 mentioned above and you’re also getting the Nomad 20 solar panel.

The manufacturer says that the Yeti 400 has enough battery power to charge a laptop five or more times. This device can be charged by plugging it into an AC outlet, the DC outlet in your vehicle, or with the included solar panel. You can even purchase additional solar panels and daisychain them together to charge the battery pack more quickly.

The Goal Zero Yeti 400 Solar Generator Kit is getting fantastic reviews from customers online. We were able to find over 120 reviews for this kit and it received a very impressive average customer rating of 4.7 out of 5 stars.

People are using this device for all of the applications you would expect. Things like camping and even setting up a booth at a trade show and providing power for lights and other equipment. There was also a review from someone who works for a video production company. He said that they film in remote locations and the Goal Zero Yeti 400 Solar Generator Kit allows them to power lights and keep the batteries for all of their gear charged even if they’re filming on a mountaintop miles away from the nearest outlet. 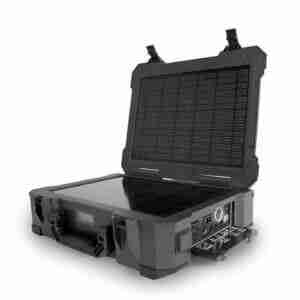 This one is another higher-priced option, but it is significantly cheaper than the Goal Zero Yeti 400 with Nomad 20 solar panel. The Renogy firefly all-in-one generator kit is available for $499.99.

This device is compact and comes with a convenient carrying handle. When the lid is closed, the outer casing is durable and weather resistant. The built-in batteries provide up to 170 W hours of energy and there are numerous outputs to power different types of devices. You’ll be able to charge any USB device or AC appliances under 150 Watts.

Many customers commented on the excellent build quality of this item. It’s very durable so it can be taken just about anywhere and you don’t have to worry about damaging fragile components. When you open the case, you’ll expose two, 10 W solar panels. With 20 Watts of solar power, it will take quite a long time to completely recharge the internal batteries, but this unit can be plugged into an AC wall outlet as well. You can also attach an additional solar panel to charge the batteries faster.

The Renogy KIT-FIREFLY 20W All-in-One Generator Kit is a very versatile, durable, and portable item that is a great choice for anyone who needs power on the go.

What Is Solar Energy?

How Much Does Solar Power Cost?